Why vagal tone is so important

The vagus nerve has been a hot topic for the past year. I’m not sure what caused this to become a topic of conversation, but I’m glad more people are becoming aware of it and how much it matters to our overall physical function.

What is the Vagus Nerve?

The vagus nerve is one of the 12 pairs of cranial nerves within the sensory-somatic nervous system. The 10th cranial nerves called vagus are the main nerves of the parasympathetic nervous system originating at the brainstem in the medulla oblongata. It travels down the sides of your neck, across the chest, and down through the abdomen.

This nerve is the sensory network that tells the brain what’s going on in our organs, most specially the digestive tract (stomach and intestines), lungs and heart, spleen, liver and kidneys, not to mention a range of other nerves that are involved in everything from talking to eye contact to facial expressions and even your ability to tune in to other people’s voices. It is made of thousands upon thousands of fibers, operating far below the level of our conscious mind. It plays a vital role in sustaining overall wellness. It is an essential part of the parasympathetic nervous system, which is responsible for calming organs after the stressed “fight-or-flight” adrenaline response to danger. 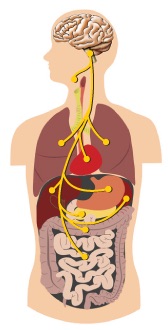 How to Improve the Function of the Vagus Nerve

Some of us have stronger vagus activity, which means our bodies can relax faster after a stress. The stronger your vagus response or vagal tone is the stronger your body is at regulating blood glucose levels, reducing the likelihood of diabetes, stroke and cardiovascular disease.

Low vagal tone, however, has been associated with chronic inflammation and if low vagal tone persists, regulation of inflammation can become less effective. Vagal tone can be determined by using an electrocardiogram to measure heart rate—one element we know we can improve with MELT. Every time you breathe in, your heart beats faster in order to speed the flow of oxygenated blood around your body. Breathe out and your heart rate slows. This variability is one of many things regulated by the vagus nerve, which is active when you breathe out but suppressed when you breathe in, so the bigger your difference in heart rate when breathing in and out, the higher your vagal tone.

As part of the immune system, inflammation has a useful role helping the body to heal after an injury, for example, but it can damage organs and blood vessels if it persists when it is not needed. One of the vagus nerve’s jobs is to reset the immune system and switch off the production of proteins that fuel inflammation.

With clients that come in with inflammation and chronic pain, the first thing I test is their vagal tone and if it’s low I immediately work with them to restore its function.

How to Restore Vagal Tone

Here are few tricks I’ve learned over the years along with a few key sequences from the MELT Method that directly help with restoring ideal vagal tone:

The bottom line is the cranial nerves are a significant and profound element of our autonomic neurology and overall health and wellness. Learning to care for this system is essential. Reduce stress, restore stability, and care for your body beyond doing exercises that tone your butt. You will be better for it! If you suffer from fatigue, anxiety, digestive issues, food sensitivities, or you feel depressed, have brain fog, or feel despondent, the vagus nerve is always affected.

Ready to start improving your vagal tone? The Super Bundle includes everything you need to get started.