An icy way to induce healing?

Yesterday my best friend Kara and I experienced Whole Body Cryotherapy (WBC). A friend of mine told me about this and said I had to try it and tell her what I thought about the process. I always want to know the principle behind a therapy. What I have learned about local cold therapy or cryotherapy is that it has been used for centuries to relieve pain symptoms, particularly in inflammatory diseases, injuries and symptoms of overuse. It sounded intriguing so Kara and I set up our appointment and headed just 20 blocks from my apartment to experience the treatment at KryoLife near 57th Street and Sixth Avenue. 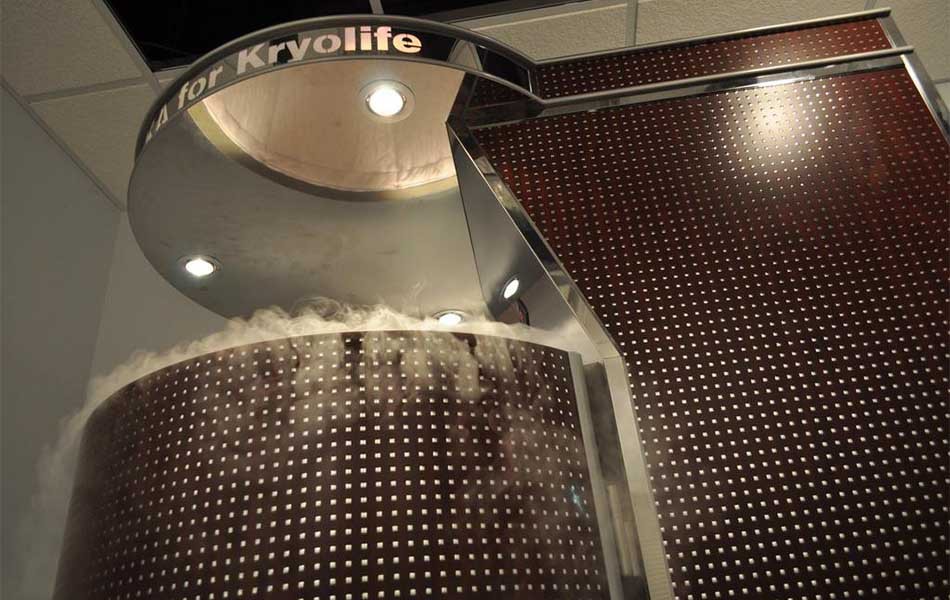 We arrived at a simple office where the receptionist has us fill out an online history form. We then basically stripped down naked, grabbed a white robe, gloves, socks and clogs, put them on and headed to a room with what looks like a stand-up silver shower stall, which is a pretty small space. I step into this contraption they call the cryo-sauna where nitrogen is pumped into the chamber letting out freezing cold air (−110 °C) for a period of three minutes. It is really, really cold, but not like taking a dip in cold water. With cryotherapy I think the sensory receptors on my skin were impacted so quickly, my brain thought I was freezing. It was as if the treatment was so cold it overrode the sensation of feeling chilled.

Because the session is over in 3 minutes, by the time you really start feeling icy, you get out of the chamber. Once I was out my body temperature almost immediately started to shift back to normal. I noticed areas of my body where I have a little body fat (like the back of my arms, hips, thighs, and buttocks) felt cold to the touch longer than my belly, forearms, and other parts where my body is more lean.

The theory and science behind the method

After doing it I looked for some research on the topic and found that it was originally used for the treatment of inflammatory rheumatic diseases like rheumatoid arthritis and ankylosing spondylarthritis and to alleviate inflammation and pain (Fricke 1989, Wichmann & Fricke 1997). It has more recently been used in sports medicine to treat injuries and syndromes of overuse (Zimmer & Zagrobelny, unpublished data, 2000). The performance-enhancing component of whole-body cryotherapy is also being increasingly used for sports. Once you are in the chamber your cardiovascular system changes, thus there are claims of lasting muscular effects (an increase in muscular perfusion, metabolism, and activation of motor units) and it’s why people believe it helps athletic performance (Papenfus 2006). Despite the possible health benefits of WBC, little scientific information is available in the literature I found overall. But it is an intriguing concept.

Although they gentleman at the spa said the main effect is to reduce joint pain and it was originally designed to help with arthritis, the research I read said that for severe arthritis, you would have to do the treatment every 2-3 hours for multiple days to really create the effects of local cryotherapy. Think of it as cold-induced analgesia, a reduction in inflammation and a decrease of the temperature of the joint that could diminish the activity of collagenases, which are cartilage destroying enzymes (Harris & McCroskery 1974). Think of it like tricking your body into a self-preservation state like the body is about to go into hypothermia. When hypothermia occurs, a lot of blood is sent to your core region to protect your organs. Blood is then enriched with oxygen, nutrients, and enzymes and after you leave the chamber super-rich nutrient blood returns to your extremities—flushing out toxins and improving circulation. The body looses heat by convection, radiation, conduction and evaporation, but I am not sure which of these WBC uses—perhaps all 5. I imagine this is similar to how jumping into a cold plunge or ice water would stimulate the hypothalamus, causing a thermo-regulatory adjustment in the body. The receptors on the skin change their firing rate if temperature changes dramatically and very fast. So if skin temperature falls, the discharge rate of the skin receptors would increase quickly. That would cause cutaneous vasoconstriction.

So what’s my take?

I think to gain any real lasting effects you would have to go daily or multiple times a day. The cost of a treatment is $90 in NYC, so to some people that is expensive. I can see why many of the avid users of this therapy are professional athletes. I found out players from the Dallas Mavericks, San Antonio Spurs and Pittsburgh Steelers use the treatment, as have the Lakers’ Kobe Bryant and world-class sprinter Tyson Gay. I would bet the team just buys the machine and the players use it before and after training workouts. I, for one, do not really have the means to indulge in a treatment like this daily. Perhaps trying it for 30 days you would really notice a change.

I think if I had severe arthritis, joint pain, or nerve damage, maybe even frozen shoulder or something of that nature this type of therapy is a non-invasive possibility to reduce pain and increase the healing process. If insurance would pick up some of the cost, it could be a much better alternative than injections, surgery, or medication.

My after-experience of the therapy was a sense of coldness under my skin in the superficial fascia hours after the treatment so for sure something is affected by the therapy. My cheeks felt more lifted, and I noticed the fatty regions of my body were cold to the touch longer than other parts of me. If I had unlimited cash, or severe joint pain, I would give this treatment a shot for a couple of weeks and see what changes it would induce in my body. I bet it could alter the neurological signals for pain and shift the brain signals to the body perhaps changing the perception of pain in joints. If you have arthritis, I would give it a shot but if you are doing it for beauty, or reducing cellulite I am not convinced this is the most cost effective therapy to try.