When it comes to self-care, women, far more than men, seek treatments outside of medical care. Over the past two decades, I can attest to this from personal experience that women were my clients nearly 4 to 1 in my office. It’s said we can identify chronic pain symptoms far more than men. One of the most prevalent chronic pain issues is pelvic pain.

I’ve worked with women pre- and post-pregnancy who suffer from SI joint pain to incontinence, as well as women who have difficulty getting pregnant due to issues and disorders like fibroids, blockages in the fallopian tubes, and endometriosis.

One disorder I feel is under treated, under funded, ignored by doctors, and difficult to manage is endometriosis. So what is this disorder and how can MELT aid women who suffer with this debilitating issue?

Endometriosis is a painful, chronic disorder that affects more than 6.3 million women and girls in the U.S., 1 million in Canada, and millions more worldwide. It occurs when tissue like that which lines the uterus (tissue called the endometrium) is found outside the uterus—usually in the abdomen on the ovaries, fallopian tubes, and ligaments that support the uterus; the area between the vagina and rectum; the outer surface of the uterus; and the lining of the pelvic cavity. Other sites for these endometrial growths may include the bladder, bowel, vagina, cervix, vulva, and in abdominal surgical scars. Less commonly they are found in the lung, arm, thigh, and other locations.

This misplaced tissue develops into growths, somewhat like scars or lesions which respond to the menstrual cycle in the same way that the tissue of the uterine lining does: each month the tissue builds up, breaks down, and sheds. Menstrual blood flows from the uterus and out of the body through the vagina, but the blood and tissue shed from endometrial growths has no way of leaving the body. This results in internal bleeding, breakdown of the blood and tissue from the lesions, and inflammation—and can cause pain, infertility, scar tissue formation, adhesions, and bowel problems.

What’s most troublesome for women suffering with this disorder is the pain and fatigue it brings along with it each month. From pain before and during menstruation, with sex, urination, bowel movements, and even gut issues like diarrhea can be symptoms of this disorder. It can also lead to infertility, which is why so many women seek out a doctor to figure out how to carry a child to term.

It’s not easy and unfortunately not only is the cause of this disorder unknown, surgeries can often times cause more issues and no improvement in the chances of pregnancy. Although I’ve read some research that exposure to dioxin (a toxic chemical byproduct of pesticide manufacturing, bleached pulp and paper products, and medical and municipal waste incineration), research has been relegated to monkeys exposed to the chemicals. The EA discovered a colony of rhesus monkeys that had developed endometriosis after exposure to dioxin. 79 percent of the monkeys exposed to dioxin developed endometriosis, and, in addition, the more dioxin exposure, the more severe the endometriosis.

Regardless, treatment tends to consist of birth control for those who don’t about getting pregnant, GnRH treatment (gonadotropin-releasing hormone) for those who do, surgeries, which tend to be unsuccessful, and of course pain medications to manage pain.

As part of my protocol for clients suffering with endometriosis, I often times work with an herbalist or acupuncturist and a nutritionist to reduce general low grade inflammation by adding omega-3 fatty acids, and supplements like thiamine (vitamin B1), magnesium, and even licorice root to a low sugar diet. As an at-home solution, I begin clients on a daily MELT regimen to both subside acute pain during menstruation as well as a maintenance map during the weeks where their pain symptoms are naturally less.

Four key sequences in all of my endometriosis clients are:

Each week we add a sequence and then, once three are known and done well, we begin adding these sequences together to develop the MELT Map, a 20-30 minute 3-time a week minimum self-treatment to reduce the inflammatory response that triggers the pain symptoms during the menstrual cycle.

By flipping the map (meaning the order of the sequences), a client can work to find an easy protocol to follow and help themselves reduce chronic pain symptoms caused by this debilitating disorder.

For many of my clients who suffered each month, missing work, being miserable and depressed, MELT helped get their life back. They reduced the frequency of lost days at work, had a boost in energy and sleep, and dozens eliminated their pain, and realized how much their nutritional habits played a role in their symptoms. I’m happy to say many of my clients also were able to get pregnant and carry a baby full term without bed rest and MELTed throughout their entire pregnancy. For all of them, the Foot Treatment was their go-to daily remedy that they never missed.

Get the most out of your MELT On Demand subscription!

Discount is automatically applied upon adding MELT On Demand and a Performance Kit to your cart. 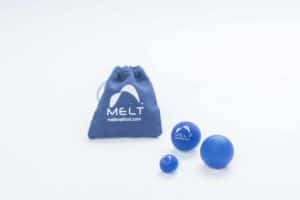 Get the most out of your MELT On Demand subscription!

Discount is automatically applied upon adding MELT On Demand and a Performance Kit to your cart.